Using Montessori to Teach Grammar in a Foreign Language Classroom

I have worked in Taiwan for over 15 years now. When I started, I was completely clueless about foreign language teaching. Over time, I learned a lot. One thing I love teaching that everyone else hates is grammar. I think it is because I managed to learn how to teach grammar using the Montessori materials. The materials and lessons actually make sense to me, while the books we use are often confusing and difficult. The methods and materials actually make a decent crossover into the more regular foreign language classroom. This note is less for the Montessorians and more for my fellow EFL/ESL (English as a Foreign Language/English as a Second Language) Teachers who have asked about this subject. Let me first give the general idea of the Montessori grammar materials, then get into specifics of how I use them in the classroom.

The most famous Montessori grammar materials are the grammar symbols. 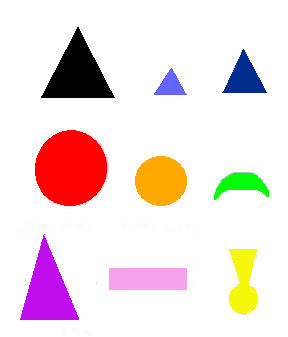 This material plays a huge part in helping students understand grammar. In the beginning stages, there are 9 grammar symbols, shown above. These 9 are shown and practiced in the Montessori Lower Elementary program (1-3 grade, or 6-9 year olds).
In order of how they are laid out in the photo above, they are:

The reasons for the shape are important. The article, adjective, and noun all belong to what we call the noun family. They are represented by a triangle to signify a 2-dimensional model of a pyramid. The noun, like the pyramid, is one of the worlds' strongest and oldest man made structures. Many people believe that nouns may have been the first words spoken by humans to communicate.

The verb is a red circle because is signifies action and motion. The circle is the two-dimensional representation of a sphere. The adverb is also a circle because it helps associate it with the verb (even though they can also modify adjectives, but that lesson comes a little later than the basic lessons).

The pronoun's job is to take the place of a noun in the sentence. It is therefore similar in shape to the noun, being that it is a triangle. But since it replaces the noun, it needs a different shape and color: so it is a purple isosceles triangle.

The interjection is interesting. Interjections are words like, "WOW!" or "YIKES!" or "ACK!" They are often one word or even sound that display a strong emotional concept. Most training centers I have seen teach it as a keyhole, as if the word unlocks a whole room full of emotions. Others teach it as an exclamation point. I guess both ways are valid enough and convey the idea.

There are specific lessons that go with these. I do them somewhat differently than the website I am about to point you to, but it's a good place to start:
http://www.infomontessori.com/language/total-reading-function-of-words.htm
That website offers a good overview of the Montessori language for this under the "Total Reading" section on the left-hand bar.

In the non-Montessori classroom I taught in, the students are able to take the boring books we have had and add to it. As students learn about nouns, articles, adjectives, and verbs, they're able to color the correct label over each. They often ask me what a different word that they have not learned and it provides me with the opportunity to teach that lesson if they are ready for it, or just explain which symbol to use and save the lesson for later.

Another good game that helped was providing them with a list of symbols they already knew. For example, I could put together the symbols for the following phrases (in order):

The students would then have to come up with sentences. This could work well in either a team or individually.

After they came up with the sentences, I would have them tear apart the sentences from their paper into individual words that they could now move around. I would give them the same list of grammar symbols, but add some in and they would have to add words into the sentences they already have. For example, now it would be:

The sentences were quote often entertaining. The sillier, the better.

One of the best aspects of this is the fact that it helps the students to both enjoy what they are doing with grammar and truly analyze the sentence structures. I can't tell you how many times I could ask a student to label a certain sentence with the grammar symbols and they were able to correct it because they realize they forgot an article or the word order was incorrect.

Once they have mastered these 9 parts of speech, it is much easier to move on to other areas, such as gerunds or auxiliary verbs (which are covered in the upper elementary program in Montessori).

Doing this in a more traditional classroom is not as perfect as if I were doing it in a Montessori classroom, but it surely makes things a lot easier.

Matt Bronsil is the author of these posts. He can be contacted at MattBronsilMontessori@gmail.com